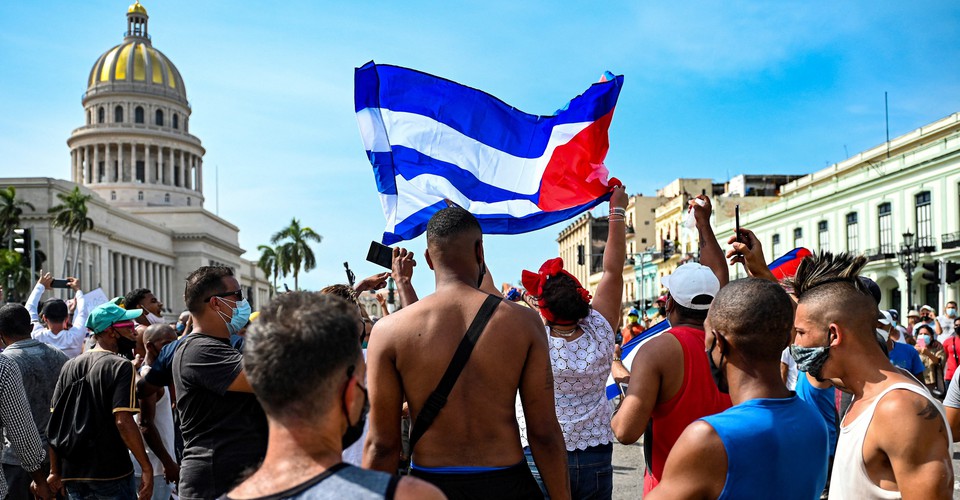 Last Sunday, Cubans in a small town 16 miles from Havana filled in the streets demonstrate against the government. The unrest quickly spread across social media, sparking protests across the island, marking the first wave of nationwide protests in the communist country in decades.

Thursday, the Black Lives Matter Global Network Foundation, the main organization of the Black Lives Matter movement, issued a statement saying the unrest was the result of “inhuman treatment inflicted on Cubans by the US federal government.” The BLM has called for the lifting of the US embargo, which it says undermines the “right of Cubans to choose their own government” and constitutes a punishment for “Cuba’s commitment to sovereignty and ‘self-determination’.

At first glance, the statement may seem like a sign of solidarity with the protesters, but BLM is actually repeating Communist officials when blaming the uprising on the United States. And that misses the point of the protests. To the surprise of The black community in Cuba and those in exile, the organization ignores what triggered the events: the systemic denial of Cuba’s rights to its people, the poor material conditions, the lack of social mobility and the inequalities that affect all Cubans, but disproportionately Afro-Cubans , who are at the forefront of the protests.

Cuba is not an empty canvas on which Americans can project their political ideas and not a utopian vehicle for advancing a fantasy of socialist equality; nor is it a pawn for opportunistic political debates. In Cuba where I grew up and which I had to give up in 2013 in search of freedom, suffering is not rhetorical.

BLM’s sympathy for the Communist government of Cuba is imbued with a sentiment of Cuba as it was in the 1980s – and that Cuba no longer exists. Like the United States, Cuba has a long history of slavery, followed by various forms of institutional racism. The Cuban Communist Revolution in 1959 created socio-economic opportunities for black and mixed-race Cubans. The resources of the former Soviet Union helped support the economy and reduce historical disparities. Cuba under Fidel Castro was a dictatorship, but it is also true that racial equity in education, life expectancy and employment improved for some time during his tenure.

The official BLM statement emphasizes that the Cuban government has acted in solidarity with historically oppressed blacks, including offering political asylum to Americans. Assata Shakur, former member of the Black Liberation Army, and supporting African countries in their struggle for independence. Fair enough. However, the Cuba that Shakur moved to in 1984 no longer exists. It was possible in the early 1980s to turn a blind eye, as many did, to the authoritarianism of the Castro regime. After all, subsidized by the Soviet Union, Cubans lived in relatively equal material conditions. They had free access to quality public education and excellent health care. Now, the idealized Cuban regime that BLM praises is long gone, if it really existed.

After the collapse of the Soviet Union, the Cuban economy collapsed. During what is called the “special period”In the early 1990s, Cubans faced widespread food rationing and severe energy shortages. Under pressure, Castro allowed the circulation of US dollars through remittances and tourism. To everyone’s surprise, it allowed Cubans to operate small private businesses. During this period of economic liberalism, however, Cuba’s racial inequalities resurfaced.

Remittances and tourism are the main sources of government revenue. Yet the inequality in these arenas is blatant. Sixty to 90 percent of white households have relatives living outside the country; for non-whites, the numbers are much lower, at around 30 to 40 percent. These statistics mean that foreign currency entering Cuba mainly benefits white Cubans. Black Cubans who have no relatives living abroad are destined to work in the low-wage, state-controlled economy; on the black market; or in the emerging private sector. As Harvard professor Alejandro de la Fuente pointed out, many business owners in the private sector discriminate against black job seekers, a prejudice visible in the tourism industry.

Unfortunately, inequality has worsened. The students of Cuban universities today are predominantly white or fair-skinned; only 4.8 percent are black or brown at the University of Havana, for example. The prison population is Disproportionately black. The black neighborhoods are the poorest in Havana. “While 58% of white Cubans have incomes below $ 3,000”, de la Fuente wrote in the New York Times, “among Afro-Cubans, this proportion reaches 95%”.

Although the embargo undoubtedly played a role in Cuba’s economic woes, the main obstacle to Cuba’s development and prosperity is the government’s model of a state-controlled economy, a system in which Cubans do not. cannot materialize their entrepreneurial energy, in which a police regime frequently arrests black Cubans, and in which everyday items are hard to find.

Unsurprisingly, Havana’s predominantly black neighborhoods, the city’s most neglected, are the epicenters of the biggest recent protests, as the pictures show. In some of them, like La Güinera, Centro Habana, Diez de Octubre, Cerro and La Habana Vieja, we have seen clashes between protesters and police and government officials posing as civilians. As a result, black Cubans, along with their compatriots of all races, are disproportionately beaten, brutalized and imprisoned for protesting. The government is call publicly them “thugs” and “criminals” in the state-controlled media. The Cuban government has officially recognized the death of Diubis Laurencio Tejeda, a young black from La Güinera who deceased during a clash with the police.

To read: How did Fidel Castro last so long in Cuba?

BLM certainly has a role to play in Cuba. But his purpose in issuing the statement has nothing to do with Cuba itself. The organization uses the Cuban movement to criticize the US government and its foreign policy. He praised former President Barack Obama for lifting the sanctions against Cuba, which his successor later rescinded, and which the Biden administration was slow to amend.

Cubans, and black Cubans in particular, are suffering. The Cuban judicial system is to pursue protesters with sentences of up to 20 years. BLM, of all organizations, must know that Cubans cannot breathe either. The lives of black Cubans also matter; the freedom of all Cubans should count. To echo the organization’s stated purpose, no one is free until all of us are.