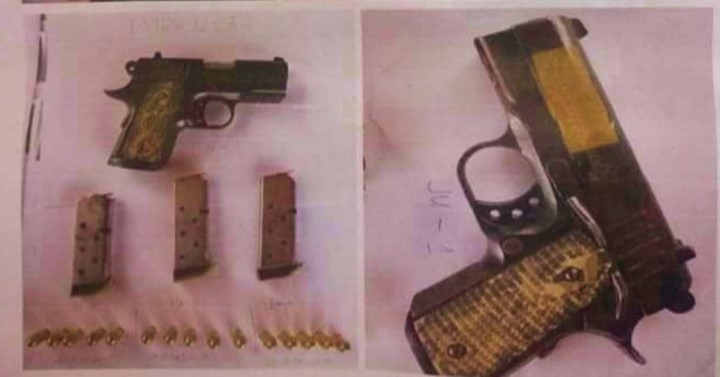 CITY OF COTABATO – Two people were arrested for possession of a firearm and ammunition during a voter registration hearing of the Electoral Commission (Comelec) in Datu Blah Sinsuat, Maguindanao, on Monday.

In a report, Lt. Pasigan Abas, the police officer in charge of Datu Blah Sinsuat, identified those arrested as Datu Anabe Batua and Abe Lumalag, both from Barangay Tambak in the municipality.

Abas said the two men were apprehended by police following minor unrest at the location of the Comelec town hall hearing.

The Comelec hearing intends to determine the inactive or the duplicates registered in a zone, to clean the list of electors of Comelec.

Police, backed by members of the Philippine Marines, kept the unrest from spiraling out of control after two groups exchanged beards during Monday’s hearing of the Local Elections Registration Board (ERB) when demanded as that registered voter of Bai Ingrid Sinsuat, daughter of the Sinsuat political clan in the province, was questioned.

The authorities intervened when supporters of Bai Ingrid and those of the president of Asanal Sinsuat village of Barangay Resa exchanged words.

Four residents, including Asanal, contested his application to register as a resident voter of Barangay Resa.

“It was at this point that a .45 caliber compact pistol fell from Batua’s waist, prompting the authorities to arrest him,” Abas said.

Another search on Lumalag, a colleague from Batua, yielded three .45 caliber magazines with ammunition.

Both are supporters of Bai Ingrid, who insisted that Batua is allowed to carry a gun.

Bai Ingrid was the wife of the late Datu Hoffer Ampatuan, son of the late former Governor of Maguindanao Andal Ampatuan Sr.

Residents said Bai Ingrid was planning to run for town hall, but she did not answer questions from reporters.

She insisted, however, that she is a resident and that her family has an ancestral home in the village.

Asanal said Bai Ingrid resides in Davao City and has not resided in the village for six years.

The issue was not resolved and tension increased as supporters on both sides rallied at the center of city government.

Comelec’s ERB has yet to schedule another hearing at Bai Ingrid’s request.

Batua and Lumalag, currently detained at Datu Blah Sinsuat Police Station, have been charged with violating RA 10591 or the “Comprehensive Firearms and Ammunition Regulation Act”. (ANP)